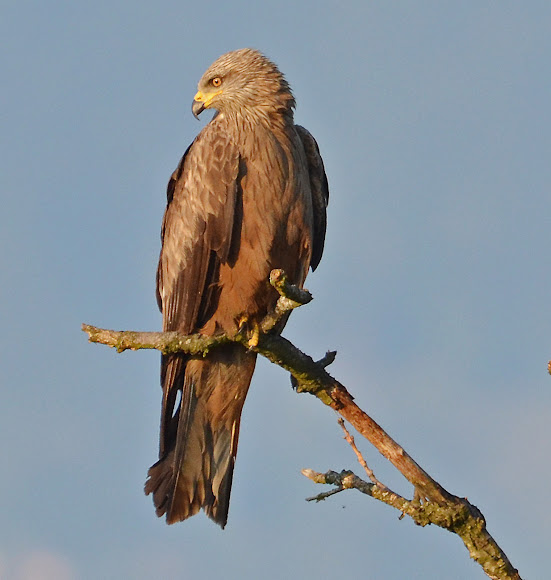 This beautiful raptor stopped for a few seconds on the oak tree opposite my house. After spotting the photographer (2nd shot), the kite's attention was directed to harassing resident juvenile ravens which "own" the tree (see last 2 shots), and which proceeded to promptly evict the raptor. First tentatively identified as a Red Kite, this bird shows mostly features of the Black Kite. Hybrids between the Back Kite and the Red Kite have been occasionally observed in the wild; see Notes and comments regarding identification.

This bird was identified as a Black Kite on the basis of the following criteria: head not grey; tail fork appears shallow; on the sitting bird, primaries almost reach the end of the tail. http://www.gobirding.eu/Photos/BlackKite... The Black Kite and Red Kite can be more easily distinguished on shots taken of the bird in flight, which unfortunately are missing here. Added in the light of difficulties in identifying this bird as Black or Red Kite: From Wikipedia: "Allozyme data indicates that the genetic diversity in both Black and Red Kites is rather low.[1] Successful hybridization between Milvus kites is fairly commonplace, making mtDNA analyses unreliable to resolve the genus' phylogeny. Furthermore, there is no good correlation between molecular characters and biogeography and morphology in the Red Kite due to very incomplete lineage sorting". http://en.wikipedia.org/wiki/Milvus See also: http://www.birdwatch.co.uk/channel/newsi... http://rapaces.lpo.fr/sites/default/file... Both Black Kite and Red Kite are present in the area where the bird was spotted: http://www.vogelwarte.ch/schwarzmilan.ht... http://www.vogelwarte.ch/red-kite.html

Thank you António and surekha!

He looked so peaceful on his perch until then..!! Ha ha, great series, Daniele!

Beautiful series Daniele,perfect spotting with great info,congrats and thanks for sharing

Thank you Carol and Dixie! Dixie, a good listener and a good spotter too: we made eye contact (2nd shot)!

Beautiful series! What a beautiful bird.
5th photo: Such a good listener!

Thank you Maria and Rieko!

No you're not Domi :-) I'm still slightly puzzled by this bird, especially its size. No wonder I took so long to post it. All would be much clearer had I got an in flight or open wing shot; I blew it by reattaching the camera to the tripod while the ravens kicked him off :-(

Buhh! Daniele, I think I am getting old and gaga...
I completely forgot that we also have the Schwarzmilan, which is however very rare in my area, so that's why I did not think of it by checking yours, sorry!

Thank you Daniela! Yes, they really are :-)

On the basis of a discussion with Malcolm Wilton-Jones I have changed the ID of this bird from Red Kite to Black Kite, based on the following criteria:
- head not grey
- tail fork appears shallow
- on the sitting bird, primaries almost reach the end of the tail
http://www.birdforum.net/opus/Black_Kite...

Thank you Noel and Jemma, and thank you bayucca for the confirmation. The two crows were fast at expelling him/her. I missed all the final action shots by wasting time putting the camera back on the tripod; I too got my lesson :-)

I think we do not have any other candidate as big as the Red Milan in our country. Nice shot of the comparison with a crow. They always do nasty games together.

Thank you Ali! Nice to see you again on Project Noah!