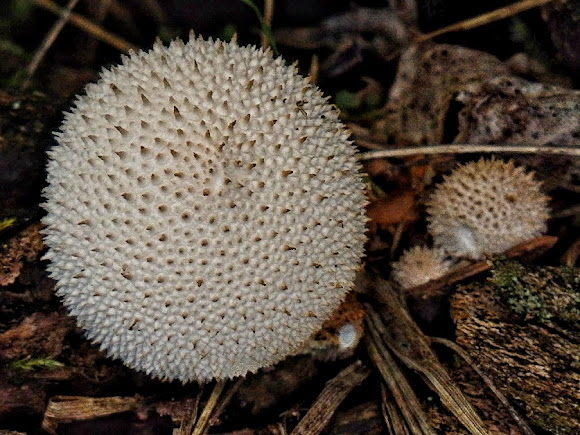 The puffball grows in fields, gardens, and along roadsides, as well as in grassy clearings in woods. It is edible when young and the internal flesh is completely white, although care must be taken to avoid confusion with immature fruit bodies of poisonous Amanita species. L. perlatum can usually be distinguished from other similar puffballs by differences in surface texture. Several chemical compounds have been isolated and identified from the fruit bodies of L. perlatum, including sterol derivatives, volatile compounds that give the puffball its flavor and odor, and the unusual amino acid lycoperdic acid. Laboratory tests indicate that extracts of the puffball have antimicrobial and antifungal activities. - excerpt from Expedia

Thank you all so much!

Great photos Rieko,congrats on the well deserved SOTW and thanks for sharing

Thank you so very much!

Congrats Rieko, this neat mushroom has been voted as Spotting of the Week!

Thank you very much.