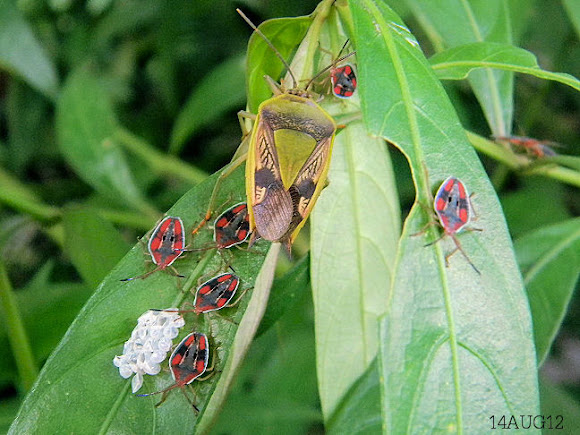 A "giant shield bug" (Family Tessaratomidae) demonstrating brooding behavior with recently hatched nymphs. "Nymphs usually undergo four to five successive stages of moltings, increasing in size and becoming more adult-like with each stage until the final molting. The stages are individually known as instars, with the earliest stage (just after hatching) being known as the first nymphal instar." Nymphs may also differ significantly from adults in colors and patterns exhibited. In some species, nymphs often exhibit strikingly vibrant colors in contrast to the relative drabness of adults. The colors can also vary between instars.

This spotting on goldfussia (Strobilanthes sp.) hedge vegetation a large semi-urban yard & garden next to a disturbed patch of remnant forest. This is in the equatorial tropics on northern New Guinea.

It appears that August is the season for this species to reproduce. See the August 2011 brood spotting of a specimen of this species from almost the exact same spot: http://www.projectnoah.org/spottings/715... This brood was monitored and photographed every day from 9 August through 14 August 2012 when it dispersed. This series documents the change from 1st to 2nd instar, in descending/reverse order.

Well today is the last installment in this series. Why? Because the new 2nd instar nymphs (making their appearance yesterday -- see 2nd photo) have begun dispersing! And the ever diligent mother has retired from her post.

Awesome series..! Loved each and every frame..:-)

Thanks so much Jeanette, Rob, Sachin, Luis & EugelBratinella!

Wow, thanks so much Neil and Laura! It's great fun and enlightening to document this process!

Wow, awesome! Great series, Scott, this is definitely a great use of Project Noah - both to show the parenting skills of insects and how the babies develop! Such an insightful spotting

What a difference a day makes! Compare yesterday's photo to today's. I told you it wouldn't be long! A new instar

OK, today's photo is up! Despite a heavy downpour, Mom didn't abandon her post. The nymphs are showing more aposematic red. It won't be long now until they completely change!

Today's photo has been added to the front. See the dates at the bottom of the frame.