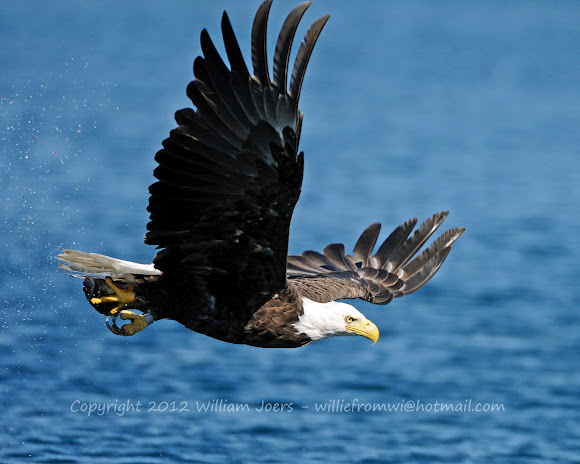 This eagle may be the same eagle I photographed two years ago. This bird was on the same lake and in the same exact area as my earlier spotting. This bird is banded, and I am not certain the other one was. My earlier photos do not show a band. I had one chance to catch him fishing and I managed to clip his wings on both captures. Maybe next year, if I have the opportunity to visit the area again.

If you have them in your area, and will respect their nest you can generally watch them from a distance for a day or so, and pattern them. Many use the same area to fish for instance. If they are catching and eating a lot of fish, they also tend to eat them in the same location. Just some thoughts to help you on your journey to seeing and perhaps capturing an image of a bald eagle. Please Please Please respect their nesting area.

I have to second nettogone. There are some pairs that winter in the Texas hill country and there seem to be more showing up every year which to me is super exciting. Your shots are BEAUTIFUL! Maybe this winter I'll capture a couple shots of our winter visitors.

We have some in Texas too. The sightings are few and far between. But they do tend to nest in the same spots every year. I was kind of surprised myself.

Thanks Nexttogone, Nancy and Luis. Nancy Bald Eagles can be found in many areas. I had spotted this one two years prior, and had it from a good source that he was still being seen in the area. Bald Eagles are making a tremendous comeback. I remember traveling up and along the roads near the Mississippi River in Wisconsin. As a child if we saw one or two a day back then it was considered quite the accomplishment. Now, they can be found in many areas of our fine State. In the winter, it is not uncommon to see as many as 20 birds in some areas.

How did you find one??? I've never seen one before.

Haha, now I know what kinda lens I need to be saving up money for. Currently my telephoto is just a 55-250 lens. Pretty decent for my current uses, but doesn't reach as far as I need for this kinda thing.

Incredible spottings! I'll be sure to keep your email if I ever have a question.

Dragoon, this was taken at 360mm and the zoom lens is capable of 400mm. If you would like any additional information simply email me, and I will be happy to provide you with it. If you have not had the time to look at my other spottings I have better eagle captures up on Noah, along with many other bird spottings. Birds are what I primarily do, simply because I have a great love for them. My email address is on my profile page or you can cut and paste it from here if you wish. It is as follows: williefromwi@hotmail.com.

Incredible! What focal length lens were you using? I've been looking into bird photography.