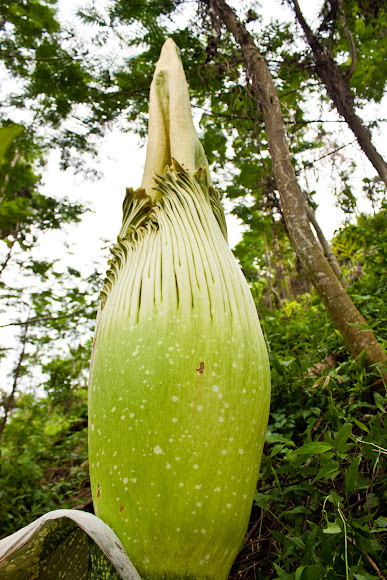 From Wikipedia: Amorphophallus titanum, known as the titan arum, is a flowering plant with the largest unbranched inflorescence in the world. Due to its odor, which is reminiscent of the smell of a decomposing mammal, the titan arum is characterized as a carrion flower, and is also known as the "corpse flower", or "corpse plant" (Indonesian: bunga bangkai – bunga means flower, while bangkai means corpse or cadaver). For the same reason, the title "corpse flower" is also attributed to the genus Rafflesia which, like the titan arum, grows in the rainforests of Sumatra.

Found in farmland near the border of Kerinci regency, Jambi province and Solok Selatan regency, West Sumatra province on the edge of the Kerinci Seblat National Park.

The flower in the first two pictures was still a few days away from opening. It stood about 8 feet tall. The flower in the last picture was found nearby, already well past the blooming stage.

Hi luke.machin. Your spotting is featured in the new PN blog post via a link! Cheers
http://projectnoah.tumblr.com/post/58511...

Only a 6 hour roundtrip? That's definitely worth it. Would be awesome to camp out beside one. They often open in the evening. Yes, ours wilted very quickly but that's probably because it was indoors. They require high humidity and a gardener wanted a mist machine to help it out but was denied. So I'm thinking in the wild they would last a few days and look better longer.

Yeah, I do regret not going back. It was farther from my house than I expected (3 hours, so 6 hours round trip on my motorcycle). Hopefully I'll hear about another one blooming one of these days and be able to get it.
I saw your spotting from the Floral Showhouse. Really beautiful photos! I'm surprised at how quickly you said it wilted, though! I thought they last at least for a few days. Guess I'll definitely have to camp out by one next time to be sure I don't miss it!

Phenomenal spotting to see one in the wild. I only saw them during their vegetative growth in Sumatra. A few months ago we had two bloom at my work. I got to spend the day photographing the one, best day of work ever! These were so close to blooming I would have waited and came back to see them in bloom. I stalked flowers before, waiting for them to open.

Thanks, Maria! It was a great privilege to see it. Hopefully next time I'll have the good fortune to catch one when it's in full bloom!

Great series and how nice you saw one outside a botanical garden!