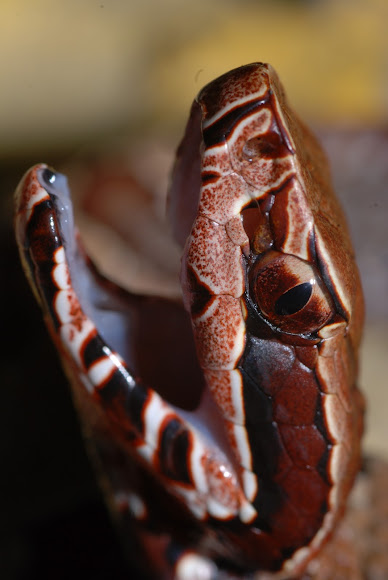 "The cottonmouth (Agkistrodon piscivorus) is North America’s only venomous aquatic snake. It gets its common name from the inner white lining of the mouth, which is displayed during this species’ characteristic defensive gaping behaviour."

"The cottonmouth is a ground-dwelling, semi-aquatic snake, and may be found in a variety of habitats. These include riparian zones around streams, river floodplains, swamps, wetlands and marshes. It may also be found in drainage ditches, as well as in ponds and streams within pine forest and offshore keys. The cottonmouth is usually found close to water and occurs up to elevations of 700 metres.

Also known as a water moccasin

congratulations! on your SOTD. well deserved. :)

What a cute little baby! Congrats!

great shots - it's good you get get the inside of his mouth - well done !!

Thank you everyone! And thanks to Project Noah for featuring the photo!

Beautiful photo! I got bit by one of them... pain is unbelievable! Not sure what criteria was used in the quote above to determine they're an "aquatic snake" and the only venomous ones in North America, but I've seen plenty of copperheads swimming in local rivers here (South Carolina) and they're venomous too :)

Beautiful snake and a great shot of the head too.

This awesome and educational close-up shows us how this awesome snake earned its name! Thanks for all the awesome contributions.

"Also known as a Water Moccasin, the Cottonmouth is the only venomous aquatic snake found in North America."