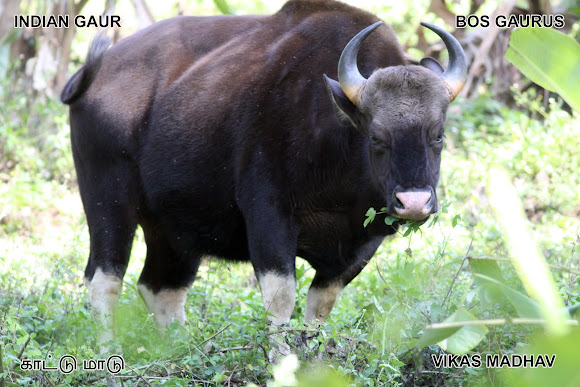 The gaur is an extremely large mammal.The gaur is a strong and massively built species with a high convex ridge on the forehead between the horns, which bends forward, causing a deep hollow in the profile of the upper part of the head. There is a prominent ridge on the back. The ears are very large; the tail only just reaches the hocks, and in old bulls the hair becomes very thin on the back. In colour, the adult male gaur is dark brown, approaching black in very old individuals; the upper part of the head, from above the eyes to the nape of the neck, is, however, ashy gray, or occasionally dirty white; the muzzle is pale coloured, and the lower part of the legs are pure white or tan. The cows and young bulls are paler, and in some instances have a rufous tinge, which is most marked in groups inhabiting dry and open districts. The tail is shorter than in the typical oxen, reaching only to the hocks.

it is found in the evergreen forests or semi-evergreen and moist deciduous forests, but also occur in deciduous forest areas at the periphery of their range. Gaur habitat is characterized by large, relatively undisturbed forest tracts, hilly terrain below an altitude of 5,000 to 6,000 ft (1,500 to 1,800 m), availability of water, and an abundance of forage in the form of grasses, bamboo, shrubs, and trees.

it is a very unpredictable mammal, killing many in India.In Kodaikanal atl;east1 person EVERYDAY is killed. They have few predators as urbanisation has driven away tigers,dhole and leopard.