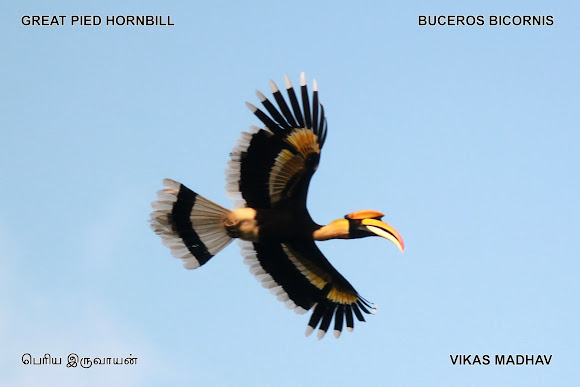 The Great Hornbill is a large bird, 95–130 cm (37–51 in) long, with a 152 cm (60 in) wingspan and a weight of 2.15–4 kg (4.7-8.8 lbs). It is the heaviest, but not the longest, Asian hornbill. The most prominent feature of the hornbill is the bright yellow and black casque on top of its massive bill. The casque appears U-shaped when viewed from the front and the top is concave with two ridges along the sides that form points in the front, a reference to which is made in the Latin species epithet bicornis. . Male hornbills have been known to indulge in aerial casque butting, with birds striking each other in flight

The distribution of the species is fragmented over its range in South and Southeast Asia. In South Asia they are found in a few forest areas in the Western Ghats and in the forests along the Himalayas. Their distribution extends into Thailand, Burma, Malaya and Sumatra. Their habitat is dense old growth (unlogged) forests in hilly regions. They appear to be dependent on large stretches of forest unlike many of the smaller hornbills. In Thailand the home ranges of males was found to be about 3.7 km² during the breeding season and about 14.7 km² during the non-breeding season.

They forage along branches, moving along by hopping, looking for insects, nestling birds, small lizards, tearing up bark and examining them. Prey are caught, tossed in the air and swallowed. A rare squirrel, the Travancore flying squirrel Petinomys fuscocapillus has been noted in the diet of the species while Collared Scops Owl Otus bakkamoena, Jungle Owlet Glaucidium radiatum and Grey-fronted Green Pigeon Treron pompadora have been noted as prey birds in the Western Ghats. they are monogamous in nature.