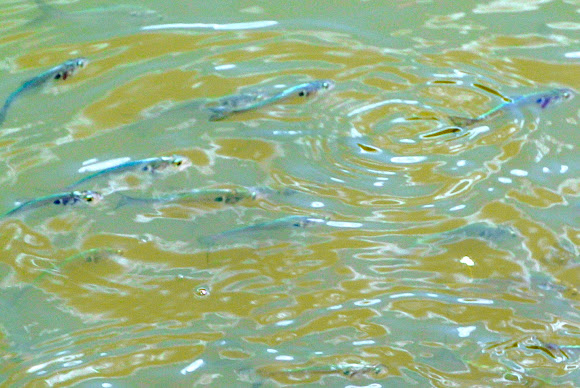 The western mosquitofish (Gambusia affinis) is a species of freshwater fish, also commonly, if ambiguously, known by its generic name, gambusia or by the common name "gambezi". There is also an eastern mosquitofish (G. holbrooki).[2] Mosquitofish are small in comparison to other fish, with females reaching an overall length of 7 centimeters (2.8 in) and males at a length of 4 centimeters (1.6 in). Females can be distinguished from males by their size and a gravid spot at the posterior of their abdomen. The name "mosquitofish" was given because the diet of this fish predominantly consists of large amounts of mosquito larvae, relative to body size. [3]