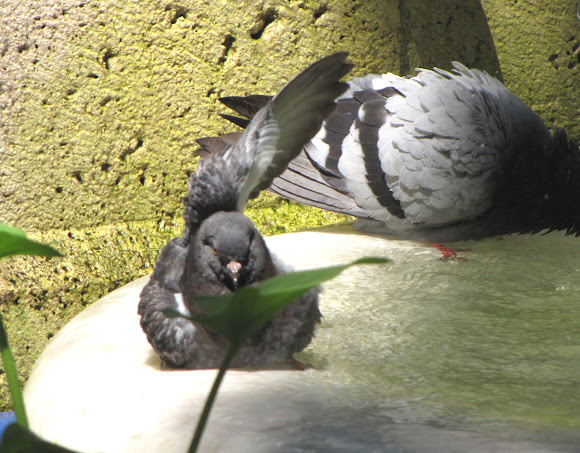 The Rock Dove (Columba livia) or Rock Pigeon, is a member of the bird family Columbidae (doves and pigeons). In common usage, this bird is often simply referred to as the "pigeon" or also called city doves, city pigeons, or street pigeons. (Wikipedia). And this multiplicity of common names is why using binomial scientific names is so important! See PN blog: http://blog.projectnoah.org/post/2870249...

The Rock Dove has a restricted natural resident range in western and southern Europe, North Africa, and into South Asia. The Rock Dove is often found in pairs in the breeding season but is usually gregarious.[4] The species (including ferals) has a large range, with an estimated global extent of occurrence of 10 million km². It has a large global population, including an estimated 17–28 million individuals in Europe[1] Fossil evidence suggests the Rock Dove originated in southern Asia and skeletal remains unearthed in Israel confirm their existence there for at least three hundred thousand years.[5] However, this species has such a long history with humans that it's impossible to tell exactly where the species' original range was.[6] Its habitat is natural cliffs, usually on coasts. Its domesticated form, the feral pigeon, has been widely introduced elsewhere, and is common, especially in cities, over much of the world. (Wikipedia)

A very cool thing about pigeons is that they make "crop milk." Crop milk is a secretion from the lining of the crop of parent birds that is regurgitated to young birds. They are found among all pigeons and doves where they are referred to as pigeon milk. Crop milk is also produced by flamingos and some penguins. (Wikipedia)