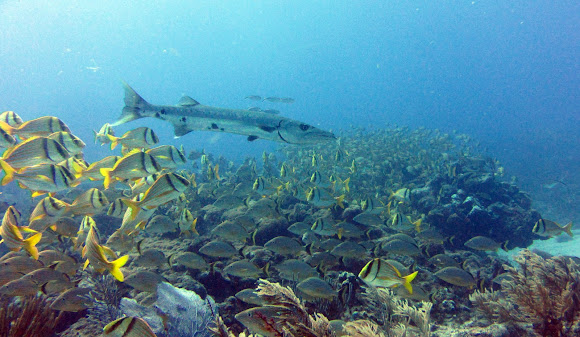 Photo take at -35 ft in a Caribbean reef. This Grate Barracuda swim by patrol the reef for lunch , has a long, streamlined body with the second dorsal fin set far back near the tail. This fin arrangement, along with a large, powerful tail, allows it to stalk its prey and then accelerate forward at great speed. This is a fantastic predator.

Barracudas are more or less solitary in their habits. Young and half-grown fish frequently congregate in shoals. Their food is composed almost totally of fish of all kinds. Large barracudas, when gorged, may attempt to herd a school of prey fish in shallow water, where they guard over them until they are ready for another hunt.In the Atlantic coast of tropical America from North Carolina all the Caribbean sea, Gulf of México to the North of Brazil.

Eating even small amounts of barracuda can result in ciguatera poisoning, caused by toxins accumulated from its food you have to bee an expert to identified if the fish is good or bad to eat.

Great great! I Saw Barracuda's on vacation in Aruba :D