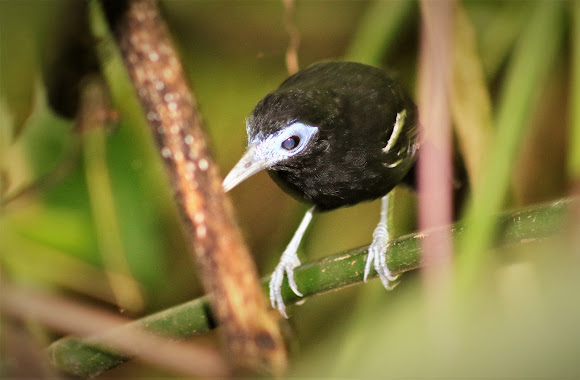 The Bare-crowned Antbird is an uncommon and inconspicuous and elusive resident of edges of lowland evergreen forest from Belize to northern Colombia. In Costa Rica it is found mostly in the Caribbean lowlands and some areas near Carara in the pacific side. It is about 16.5 cm and 34g. The male shows bare electric-blue skin on the forehead and around the eye, making it one of the more spectacular of the typically dull-colored family Thamnophilidae, and one of the more sought-after birds within its range. Bare-crowned Antbirds occupy territories in pairs, foraging for arthropods in the understory, and only ocassionally joining mixed species flocks following an army-ant swarm, if the flock happens to pass through the territory. Besides the bare crown, males show blackish upperparts with thin white spots to the secondary coverts, and chestnut underparts. The females are entirely brown, with redder underparts and more olive upperparts, with only a small patch of skin surrounding the eye,