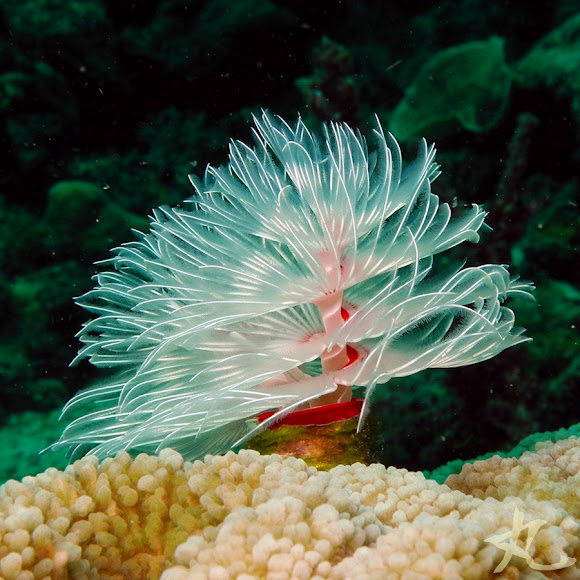 Also referred to as Protula bispiralis, and also known as Coco Worm and Magnificent Feather Duster Worm. P. magnifica is a sessile invertebrate that anchors its tail to the substrate or coral head and secretes a mineral tube around its body. It can withdraw into this tube when threatened. Its feather-like gills are arranged in a double spiral (colors vary). Tube worms are filter feeders and feed on zooplankton.

Found embedded in hard coral heads, or on sandy bottoms. Distribution: from the Red Sea to the Indo-Pacific.

This truly magnificent-looking tube worm was ensconced in a lobed cactus coral (Lobophyllia flabelliformis) at a depth of about 15m. Spotted this at a dive site called San Juan Reef, off the western coast of Samal Island in the Philippines, but I see them everywhere I dive in the Davao Gulf.

Must have been an incredible sight to see this in person! Absolutely beautiful!

Thanks, Luis and Harsha!

Yeah, I thought of Avatar too when I was shooting the video. I'm sure the movie writers were inspired by tube worms! :)

I watched the video, it looks it came from the movie Avatar. Also, I'm impressed by the water clarity.

Thank you for the compliment,, nexttogone! :")

I'm in awe over this shot!

Yup, it's very pretty! Thanks guys!

It sure is, Luis! Watch out for the video -- uploading to Youtube now.

Another beauty from the sea.