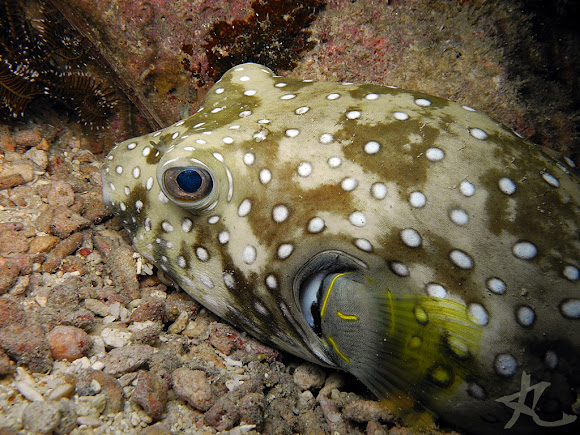 Also known as Bristly Puffer, A. hispidus has a heavy, round body; its head is large and blunt, snout short, eyes high on sides of head. It has a slit-like gill opening in front of the pectoral fin base. Its tough skin is scaleless and has small spinules on its head and body except on the snout and posterior tail base. White dots are evenly distributed across its entire length. The white-spotted puffer feeds on coralline algae, detritus, mollusks, tunicates, sponges, zoanthid sea anemones, crab, tube worms and echinoderms. It can reach a length of 50cm.

A. hispidus inhabit shallow coral and rocky reefs and nearby soft bottoms, and are found at depths of 1 to 90m. Widespread in the tropical Indo-Pacific.

Spotted this puffer on a night dive. It was sleeping and that's why I was able to get really close to take pictures. It measured about 25cm long.