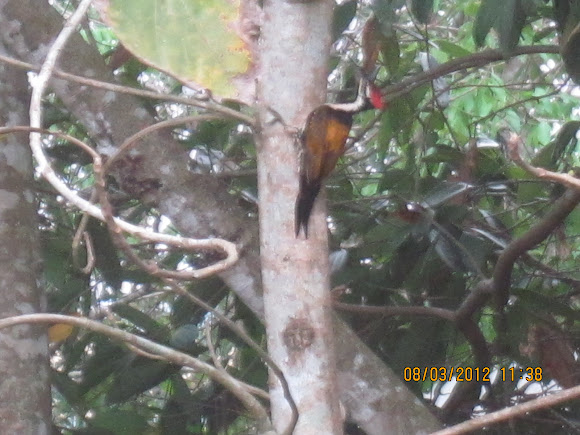 The Black-rumped Flameback is a large species at 26–29 cm in length. It has a typical woodpecker shape, and the golden yellow wing coverts are distinctive. The rump is black and not red as in the Greater Flameback. The underparts are white with dark chevron markings. The black throat finely marked with white immediately separates it from other golden backed woodpeckers in the Indian region. The head is whitish with a black nape and throat, and there is a greyish eye patch. Unlike the Greater Flameback it has no dark moustachial stripes. The adult male has a red crown and crest. Females have a black forecrown spotted with white, with red only on the rear crest. Young birds are like the female, but duller. Like other woodpeckers, this species has a straight pointed bill, a stiff tail to provide support against tree trunks, and zygodactyl feet, with two toes pointing forward, and two backward. The long tongue can be darted forward to capture insects. Leucistic birds have been recorded. Two specimens of male birds from the northern Western Ghats have been noted to have red-tipped feathers on the malar region almost forming a malar stripe. A female specimen from Lucknow has been noted to have grown an abnormal downcurved hoopoe-like bill.

This flameback is found mainly on the plains going up to an elevation of about 1200m in Pakistan, India south of the Himalayas and east till the western Assam valley and Meghalaya, Bangladesh and Sri Lanka. It is associated with open forest and cultivation. They are often seen in urban areas with wooded avenues. It is somewhat rare in the Kutch and desert region of Rajasthan.