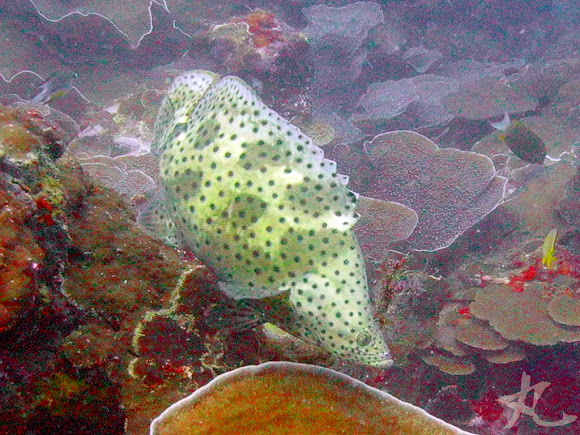 This carnivorous (and sometimes cannibalistic) fish is often called the panther grouper because of the pattern of bold black spots against a white to creamy-grey body. Also known as Barramundi Cod. Juvenile humpback groupers display fewer but larger spots, which become smaller and more plentiful as the fish grows into adulthood. When disturbed, individuals may develop a 'fright coloration', in which large brown or greenish blotches appear on its skin (as seen in this picture series). Among groupers, this unusual fish is unique in that it has an elongated slender head that rises sharply at the nape of the neck, giving the species the distinctive 'humpback' appearance (hence its name). The long dorsal fin begins at the top of this hump and extends all the way almost to the base of its tail. C. altivelis are solitary animals, and are only seen in groups when spawning. They are known to be nocturnal hunters and avoid sunlight during the day. They grow to a length of about 70cm.

Reef-associated, at depths of 2 to 40m. Found in tropical and subtropical waters. The humpback grouper is listed as a Vulnerable Species by the IUCN.

Spotted this adult barramundi (this is the preferred name here in the Davao Gulf) at a depth of 30m. I don't want to say exactly where because I don't want my data to be used by unscrupulous fishermen or game hunters (the map here shows only the general location). Judging by the coral beside it, this individual measured roughly 60cm long.