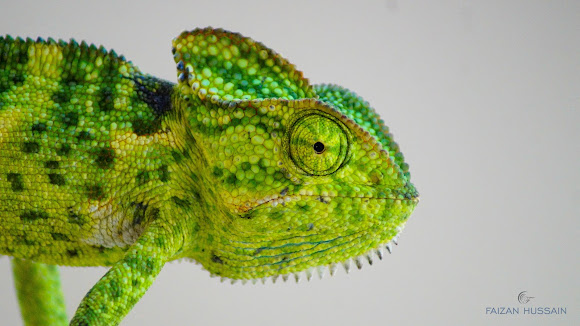 Visited Medak(Andhra Pradesh, India) a couple of weeks ago and came across this majestic creature. Indian Chameleon also known as Chamaeleo Zeylanicus , was barely within my camera range. I followed it for about 10-15 mins along village roads through rustic households. Chameleons have a vision of 360 degrees. They do this by rotating their eye balls. You can clearly see in the video (Youtube link attached) how it is rotating its eyes and observing its surroundings. The mannerism with which this Chameleon was strolling upon the boundary wall is truly mesmerizing. This slow-motion forward movement of the Chameleon is known as stammering. It climbs trees and other objects using its claw-like feet, which give it incredible amounts of grip. Its most spectacular feature is its ability to change skin pigmentation according to the surrounding environment. And it takes all of ten seconds to do so. Another aspect that surprised me was the length of its tongue. Although I couldn't capture it(the tongue) on camera, it's a lot longer than it seems in documentaries. I observed it for quite some time, learning its behavior. And I must say its quite a shy creature and gets easily spooked( not that I was trying to do so). Also, an instinctive behavior of the Chamaeleo Zeylanicus is to roll its tail into a circle whenever it feels threatened by a larger species and it can only do so while its stationary.

Lovely series of this beautiful little critter. That walk can only be caught in a video! Very cool. Thank you for sharing :)