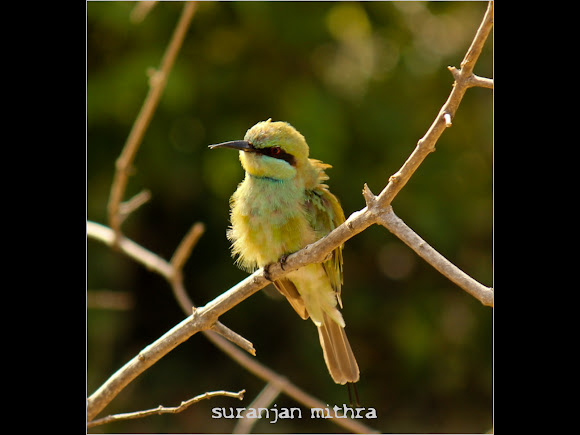 this species is a richly coloured, slender bird. It is about 9 inches (16–18 cm) long with about 2 inches made up by the elongated central tail-feathers. The sexes are not visually distinguishable. The entire plumage is bright green and tinged with blue especially on the chin and throat. The crown and upper back are tinged with golden rufous. The flight feathers are rufous washed with green and tipped with blackish. A fine black line runs in front of and behind the eye. The iris is crimson and the bill is black while the legs are dark grey.

They are mostly see in the plains but can sometimes be found up to 5000 or 6000 feet in the Himalayas. They are resident in the lowlands of South Asia but some populations move seasonally but the patterns are unclear moving away to drier regions in the rainy season and to warmer regions in winter.

Very nice series, SuranjanMithra I like the second photo as it shows off this beauty just a bit more then the other captures you made. Thanks for sharing.