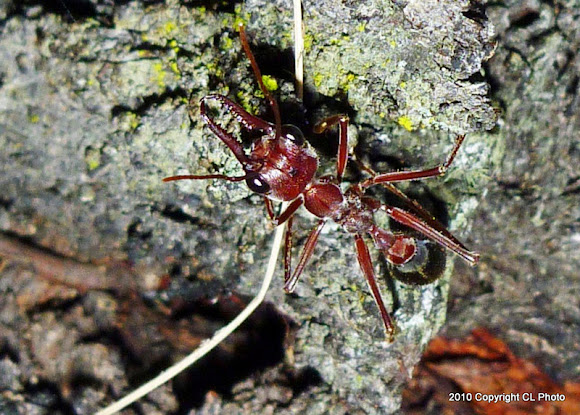 Australian Bulldog Ants, generally just called bullants are large, aggressive ants found in many parts of Australia. Bullants perform a similar function to earthworms in improving soil conditions by opening the soil and improving plant growth when they excavate their nests. Ants also play an important role in keeping the forest floor clean by collecting unhealthy, dead and exhausted insects. Bullants (Myrmecia species) have large eyes, long jaws and a prominent sting. They are generally brown, red and/or black and up to about 30mm long. It is very difficult to identify ants to species level.

Bullants make large and usually obvious nest mounds up to one metre across and often decorated with stones and pieces of plant material. A typical nest consists of a number of irregular galleries connected with runways or passages. There may be more than one entrance hole.

Bullants are amongst the most ancient species of ant in the world. Their closest relatives are species found only in fossils!