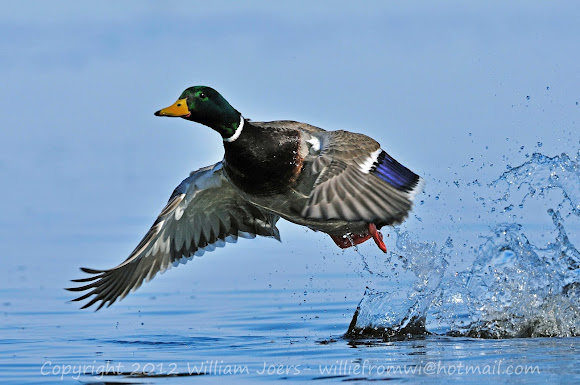 The breeding male is unmistakable, with a bright bottle-green head, black rear end and a yellowish orange bill tipped with black (as opposed to the black/orange bill in females). It has a white collar which demarcates the head from the purple-tinged brown breast, grey brown wings, and a pale grey belly. The dark tail has white borders. Habitat:

Found on a frozen lake as it began to thaw in early March of 2012. Many mallard will decide to spend the winter even when most or all the lakes and rivers in our area freeze over solid enough, that an automobile can drive onto them.

Photographed along the shores of an almost completely frozen lake. The only open waters were along the shores. Photos number 1 and 2 are of a male ( Drake) and numbers 3 and 4 are of a female ( hen ). Photographed on a partly sunny day, with light winds and cold temperatures. Temperature was in the upper 30s F. Lake was mostly frozen. Birds were active both on and off the ice. Many Mallards were present, along with two American White Pelicans, geese, and many gulls. Geese were mostly Canada, gulls were mostly ring billed gulls. Other birds of interest were red breasted Mergansers which were to far out to photograph well. Photographed in Lake park near " Stinky Point"

A very belated thank you VichenteIbañeez, Phil_S, Cheryl Lee, and namitha for your comments. I appreciate them, I only wish I could have seen them earlier so I could respond more promptly.

awesome!
U should put it on the missions: Birds of the World, and: Global Flight!

Grinning, Thanks Telse. If one has a good DSLR camera one can get photos as good as this or better. It is only a matter of being in the right place at the right time and setting your camera to get the shot you want. My aim in photographing wildlife and birds is to try to make the ordinary look extraordinary. To get the person who might not be all that crazy about wildlife to pause, take notice of the picture, and then perhaps think more about those creatures that live close to them. Perhaps even to look at them and respect them more. Glad I could WOW you! If you have a DSLR I can give you a few pointers on how to make captures like this. All I ask is you allow the birds to fly when they wish to fly. Birds will generally fly away from you if scared, they will fly at you if they are not ( depending on wind direction of course) ( and if you are lucky) I knew if I waited for him, and if I watched for the signs he gives off, I would be able to make a shot of him coming at me.

A very belated thanks to you NuwanChathuranga, and CarolSnowMilne for your kind words. Thanks for the wonderful comment as well, YukoChartraw

I hope you get to see a wood duck up close and have a camera with you when it happens, Junipurr. Wood ducks are a spectacular duck.

I've seen ONE Wood Duck in my whole life, and I was extatic :) It was too far away for a good shot, unfortunately. They're spectacular!

Junipurr, Mallard ducks are indeed beautiful in my eyes as well. Of all the ducks that can be normally be seen in my area, Wood Ducks ( Aix sponsa ) are my favorite.

These mallards are wonderfully captured. I think the beauty of the Mallard is sometimes overlooked ...maybe because it's so common. It's my favourite bird :)

Thanks TK and Luis. I truly appreciate your taking the time to both view and comment on my spottings.