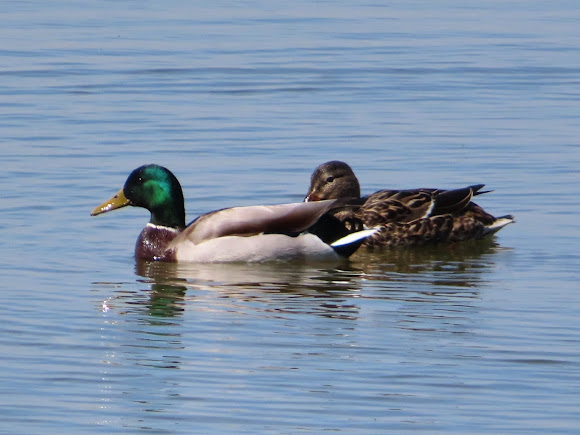 In the plumage of the male Mallard, the bright green color with iridescence stands out on the head and neck. A narrow white collar separates the head from the chest, which is brown. The beak is yellow with a black nail, while the legs are orange. Characteristic features in the design of this duck are, on the one hand, the two curly black feathers on the tail and, on the other, the eyeglass, in a purplish-blue hue - hence its name of blue -, very patent in flight. As with most ducks, this species has a marked sexual dimorphism. In this case, the females are somewhat smaller than the male and are very cryptic, with a mottled brownish plumage in which only the eyeglass stands out, the same color as in the male. The young show a great resemblance to the females, although the general tonality is somewhat reddish.

The Albufera de Valencia is a protected natural area, it is a shallow coastal lagoon (average depth 1 m) of fresh water separated from the Mediterranean Sea by a narrow sandy coastline with dunes stabilized by pine forests. La Albufera is a transit area for many species of migratory birds. The marshy perimeter zone is a marsh where rice is grown.