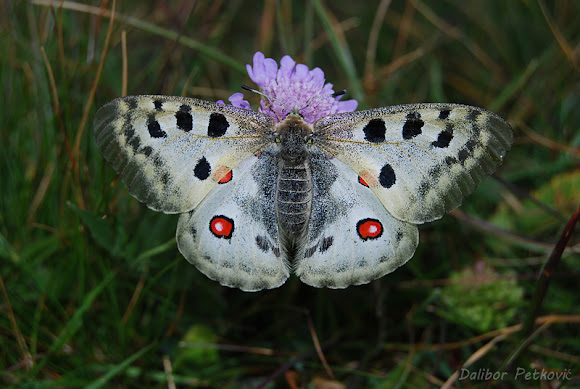 It is found on mountains in Europe usually above 1,000 metres (3,300 ft) up to 2,000 m (6,600 ft), preferring flowery meadows and mountain pastures. This species is of interest to entomologists due to the variety of subspecies, often only restricted to a specific valley in the Alps. The beautiful Apollo butterfly has long been prized by collectors, who aim to possess as many of the variants as possible. While over-collecting is believed to have caused populations to decline in some areas, such as in Spain and Italy, habitat change is thought to be a far more significant threat to this species’ survival. Plantations of conifers, the succession of suitable habitat to scrubland, agriculture, and urbanization have all reduced the habitat of the Apollo butterfly. Climate change and acid rain have also been implicated in this species decline in Fennoscandia. In addition, motor vehicles have been cited as a cause of Apollo butterfly mortalities; vehicles on a motorway system near Bozen in South Tyrol, Italy, are said to have nearly wiped out a race of the Apollo. In Finland, the Apollo was one of the first species of insects declared endangered. The Apollo population in Finland and Sweden decreased drastically during the 1950s. The reason for this is not known, but it is commonly thought to be because of a disease. In Sweden, it is now restricted to areas that have limestone in the ground, suggesting that the decrease could hypothetically be related to acid rain.

nice spotting thanks for sharing