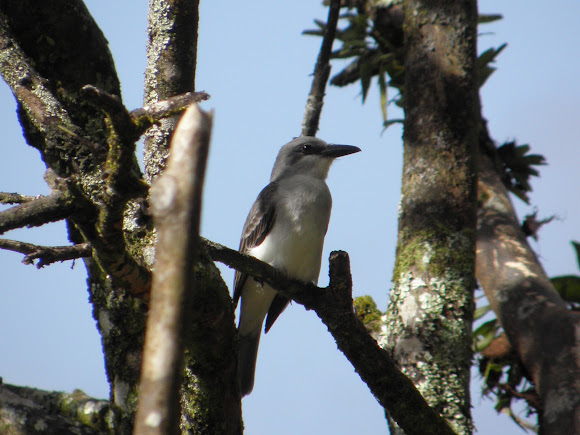 This lovely bird has a gray head down over the back of the neck, and extending over the back and wings. The ear-coverts are blackish. It has a large, black bill which has a hooked tip on the upper mandible (see pic 1).

Found floating around the same orange orchard as the Bananaquit and Jaco Parrot, along segment 10 of the Waitukubuli Trail (Colihaut Heights to Syndicate) near Syndicate, Dominica.

These birds hunt in a very similar fashion to the rainbow bee-eater (and probably other bee-eaters as well) in that it catches its insect on the wing then perches and proceeds to beat it against what it's perched on - powerline, tree branch etc. I also think the sound they make is quite similar to the rainbow bee-eater because that is initially how I determined it was a flycatcher! They were a common feathered friend around Dominica :) Reference for identification: "Dominica's Birds", p94, Arlington James, Stephen Durand, and Bertrand Jno. Baptiste, 2005