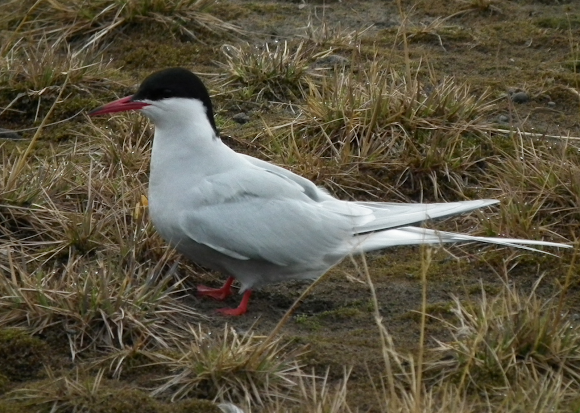 The Arctic tern has the longest migration route of any animal, leaving its breeding grounds in the Arctic to winter in the Antarctic and then making its way back north - a round trip of over 70,000 km! They are whitish grey with a black cap, and their bill and short legs are deep red. The tail is highly forked. These birds are superb aerial acrobats, able to hover and manoeuvre with ease.

Circumpolar distribution, and can be seen quite far south in the Northern Hemisphere during summer - I have seen them in the UK, and they can be spotted as far south as Northern France and the northern states of the US.

We saw these nesting terns in Ny Alesund, Svalbard. They're actually a bit of a hazard when walking around, as they nest on the ground and are super protective when people walk past! They are incredibly bold, and swooped down at us in an attempt to protect their eggs (we weren't allowed off the footpaths as the ground was protected, so of course no one was going for the eggs. They're just very protective!). The last pic shows the tern flying at me - you can see the egg behind her!

Thank you guys! TMetcalf, I was really lucky that they were nesting, they stayed on the ground and didn't fly away too much haha!

I could never get a picture of that without it flying away! Awesome!