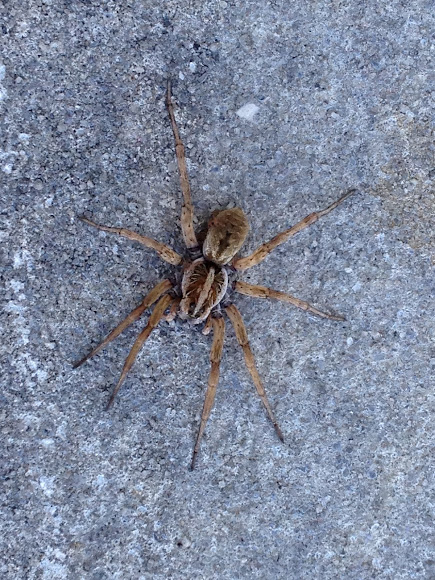 Wolf spiders are in the family Lycosidae and there are 125 species in the United States. Most of them are brown or dark in color and have bristles on their legs and body. Total length, including the legs, can be as big as 4 inches. They have 8 eyes arranged in 3 rows with the eyes in the middle row being predominately larger. They have large powerful front legs and can run very fast hunting down their prey. Wolf spiders use their excellent vision and speed to hunt pray rather than build webs to trap it. This one is a female and it had hundreds spiderlings on her back. The females carry their egg sac until the babies hatch. Then they protect their spiderlings by carrying them on their back until they are able to survive on their own usually after their first change of skin. Wolf Spiders are not aggressive towards humans and usually will only bite if cornered or threatened. The bite is not serious unless it gets infected or you have an allergic reaction. Their venom is mild to humans. Pain my last for about 10 minutes on average and researches think it is from the actual stab of the fangs rather than a reaction to the venom.

Found throughout the world in almost any terrestrial habitat. They live on the ground sometimes in burrows. Spiderlings disperse aerially allowing the species to have a wide distributions. Wolf spiders can become a house pest especially in colder climates where they are looking for a warm place to sleep for the winter. They eat insects like crickets, fly-grubs, cockroaches, mealworms and beetles.

This female was found inside our building. We attempted to move it outdoors without harming her. As soon as she was dropped on the ground outside, spiderlings spread out in every direction. The adult charged back into the building. She was again scooped up and taken further away from the building. The tiny Spiderlings were able to get back inside underneath the door. When I opened the door to check on the situation, the female again charged back into the building. I was amazed she found her way back to the door after being carried at least 30 feet away.