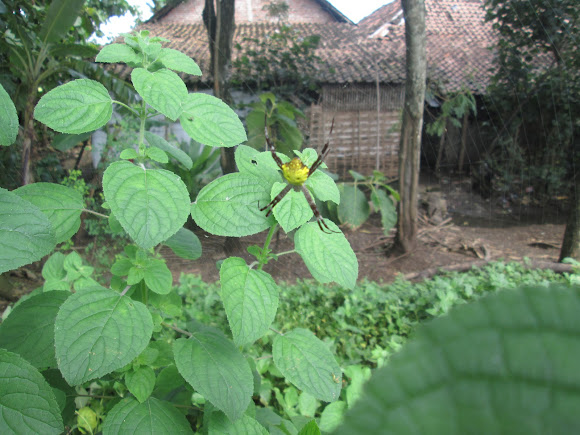 Argiope keyserlingi is a common species of orb-web spider found on the east coast of Australia, from central New South Wales to southern Queensland. It is very similar in appearance to the closely related north Queensland species, Argiope aetherea. A. keyserlingi is commonly found in large populations in suburban parks and gardens, particularly amongst the leaves of Lomandra longifolia. Like many species of orb-web spider, A. keyserlingi shows considerable sexual size dimorphism, with the females being many times larger than the males. Mature females can be seen during the summer months and it is not uncommon to see multiple males on the web of one female. This spider is commonly known as the St Andrew's Cross spider, due to the construction of bands of silk forming the arms of an X-shaped cross, similar to the one upon which St. Andrew is traditionally said to have been crucified. Termed web decorations or stabilimenta, these bands are thought to increase prey capture in this species, however, in other species they have been found to protect the spider against predators. A. keyserlingi is an important model species in studies of spider ecology and behaviour. Using this species scientists have investigated sperm competition, sexual size dimorphism, cryptic female choice, the role of pheromones in mating behaviour and the function and evolution of web decorations. Its main predators in Sydney are mantids and birds.