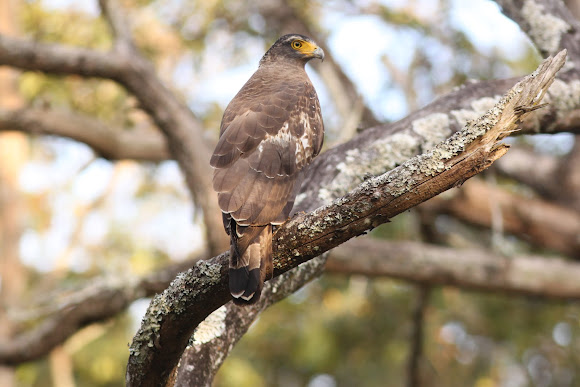 This medium-large, dark brown eagle is stocky, with rounded wings and a short tail. Its short black and white fan-shaped nuchal crest gives it a thick-necked appearance. The bare facial skin and feet are yellow. The underside is spotted with white and yellowish-brown. When perched the wing tips do not reach until the tail tip. In soaring flight, the broad and paddle-shaped wings are held in a shallow V. The tail and underside of the flight feathers are black with broad white bars. Young birds show a lot of white on the head. The tarsus is unfeathered and covered by hexagonal scales. The upper mandible does not have an overhanging festoon to the tip.

Within its widespread range across tropical Asia, 21 populations have been named as subspecieshe most widespread subspecies are the nominate from along the sub-Himalayan range in India and Nepal, melanotis in Peninsular India, spilogaster of Sri Lanka, burmanicus in most of Indochina, ricketti in northern Vietnam and southern China, malayensis of the Thai-Malay Peninsula and northern Sumatra, pallidus from northern Borneo, richmondi from southern Borneo, bido from Java and Bali, batu from southern Sumatra and Batu, hoya from Taiwan,

It is a very alert bird.If you come 10 feet near it it immeditly flies.The bird is commonly seen near termite mounds as termite mounds host varied species of snakes- its constituent diet