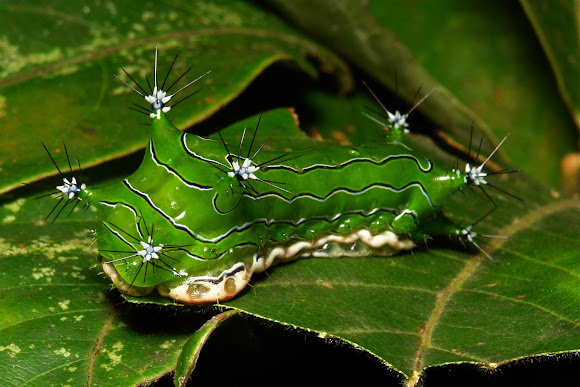 Stinging Nettle Slug Caterpillar (Cup Moth, Limacodidae) "Green Marauder". Cup Moth larvae are often highly ornamented and brightly colored. Two main types can be distinguished: larvae armed with rows of protuberances bearing stinging spines called nettle caterpillars, or non-spined forms where the surface of the larvae may by completely smooth, called gelatin caterpillars. The larvae of this family bear no prolegs on their abdominal segments. The larva attaches itself to the substrate by means of an adhesive ventral surface. The movement is like a slug hence their generic name. A stinging slug caterpillar (like this one) generally bears warning colouration and stinging hairs. These hairs can inject a venom from poison sacs carried at their base that are used as defensive weapons. Reactions can range from a mild itching to a very painful sting.

I have given each individual a descriptive superhero-style name in the title of the image. It's villainous appearance has earned this species the nickname of "Green Marauder". This is for my own reference mainly because practically none of these caterpillars are identified (maybe even ever formally) and this will allow me to group the growing number of images I have into their like-kinds including the various instars I have captured. See other images of this variety of stinging nettle caterpillar in my Flickr photostream….. http://www.flickr.com/search/?q="Gre...

Green Marauder.. yep that works for me.

@Jason Alexander
Like most Limacodids, they appear to be polyphagous. I believe this was on boxwood.

Cool! Thanks for sharing! What plant did they feed on?

That….is just one amazing caterpillar! Can't believe it is real. You picked a good name for it. I didn't realize these didn't have prolegs at all and moved by adhesion.