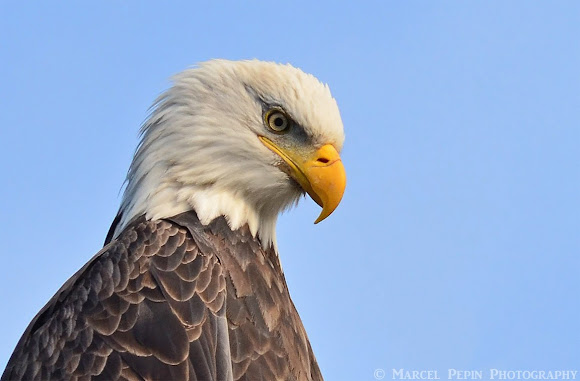 The Bald Eagle is a bird of prey found in North America. Its range includes most of Canada and Alaska, all of the contiguous United States, and northern Mexico. It is found near large bodies of open water with an abundant food supply and old-growth trees for nesting. The Bald Eagle is an opportunistic feeder which subsists mainly on fish, which it swoops down and snatches from the water with its talons. It builds the largest nest of any North American bird and the largest tree nests ever recorded for any animal species, up to 4 m (13 ft) deep, 2.5 m (8.2 ft) wide, and 1 metric ton (1.1 short tons) in weight. Sexual maturity is attained at the age of four to five years.

The Bald Eagle's natural range covers most of North America, including most of Canada, all of the continental United States, and northern Mexico. It is the only sea eagle endemic to North America. Occupying varied habitats from the bayous of Louisiana to the Sonoran Desert and the eastern deciduous forests of Quebec and New England, northern birds are migratory, while southern birds are resident, remaining on their breeding territory all year. At minimum population, in the 1950s, it was largely restricted to Alaska, the Aleutian Islands, northern and eastern Canada, and Florida. Today, they are much more common (almost attaining their peak numbers pre-colonization in North America), and nest in every continental state and province in the United States and Canada. Bald Eagles will also congregate in certain locations in winter. From November until February, one to two thousand birds winter in Squamish, British Columbia, about halfway between Vancouver and Whistler. The birds primarily gather along the Squamish and Cheakamus Rivers, attracted by the salmon spawning in the area.

Harrison Mills is a winter feeding grounds for the bad eagles. they congregate to the Lower Fraser Valley for its warmer climate, and coincides with a winter salmon run. This year was a colder than usual month of December, Some eagles made the migration ( in much smaller numbers) only to find the salmon frozen stiff to the banks of the Harrison River.

Removed from the mission 'Signs of Wildlife' because it is not a 'sign' but is 'actual' wildlife.

Hi again Marcel. You could possibly save a bit of your time copying and pasting if you just put for example... "In a pine tree just west of a big river and golf course" in 'habitat' for example. (the habitat section really means 'the immediate location for this particular specimen'). Also if you do choose to copy/paste other's words the right thing to do is to place it into "quotes" and give a reference link. Thanks again and I love your other photos.

Beautiful portrait and wonderful series! Bald Eagles are such magnificent creatures!! I would love you to add this spotting (and the others in your portfolio that apply) to the mission Raptors of North America: http://www.projectnoah.org/missions/8627...

Hi Marcel, I just came across this spotting and note that the information supplied is not in accordance with our requirements as stated in our FAQs http://www.projectnoah.org/faq
The description field should be of what you saw, not a copy from another webpage and the habitat field should state the actual habitat where the spotting was made, again not the entire contents of a web page. All the details you have written here should be covered by the link in the Reference fields.area.
When our users run reports the contents of the Description, Habitat and Notes fields are loaded into a spreadsheet for scientific and research purposes and essays such as yours merely overflow across other fields obscuring huge masses of important data.
Please comply with our requirements and remove these essays.