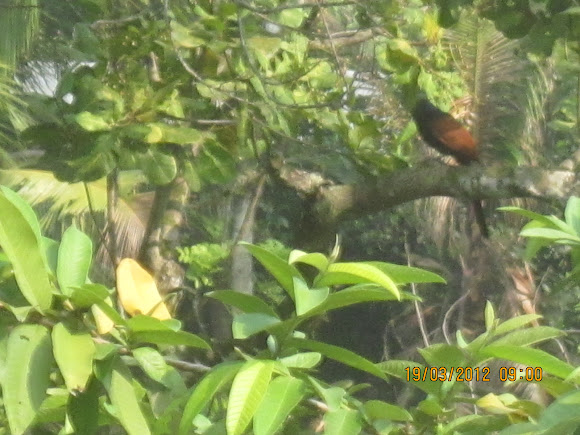 This is a large species of cuckoo at 48 cm. The head is black, upper mantle and underside are black glossed with purple. The back and wings are chestnut brown. There are no pale shaft streaks on the coverts. The eyes are ruby red. Juveniles are duller black with spots on the crown and there are whitish bars on the underside and tail. There are several geographic races and some of these populations are sometimes treated as full species. Earlier treatments included the Brown Coucal (C. (s.) andamanensis) under this name. Rasmussen & Anderton (2005) suggest that the race parroti may be a full species - the Southern Coucal which is fround in peninsular India . The race intermedius of the Assam and Bangladesh region is smaller than the nominate race found in the sub-Himalayan zone. Songs of the races are said to vary considerably. Race parroti of southern India has a black head and the underparts glossed blue and has the forehead, face and throat more brownish. The sexes are similar in plumage but females are slightly larger.

Thank you! I edited the spotting accordingly! :D