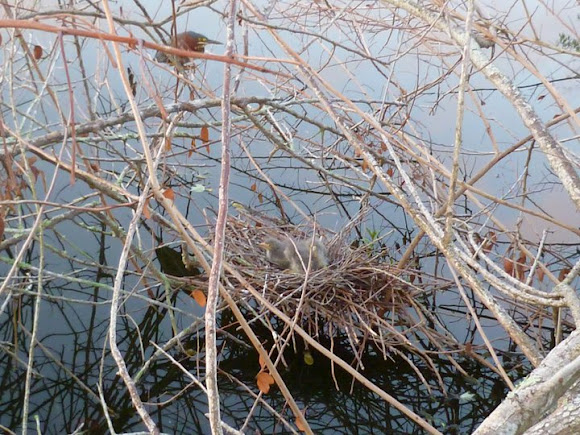 Green Herons have a glossy, greenish-black cap, a greenish back and wings that transition from grey-black into green or blue. Their neck is a brownish red with a white line down the front. The underparts are gray. They have a dark, long sharp bill and short yellow legs. Green herons are relatively small and compact. They often pull their neck in tight against their body. They are most active at dawn and dusk but will hunt during the day when they have young to feed. Green herons eat mainly small fish, frogs and aquatic insects. They hunt along the shore or in shallow water and wait for prey. Sometimes they drop food, insects, or other small objects on the water's surface to attract fish, making them one of the few known tool-using species. This clever skill has led to the Green Heron being considered one of the world's most intelligent birds.

This nest was built in a fallen tree branch just a few feet above the surface of the water. The female heron laid four eggs in late March. All four eggs hatched within about a week in early April. As the babies grew, we could watch them walking about the nest area and out onto the closest branches. They remained in the area all summer. The Green Heron nested in my back yard but I shifted the spotting location to a local park.

Yes, if they come back to nest, I will be watching more closely to see if I can observe the fish luring behavior. Thanks introducing me to the Animal Architecture Mission. I'll get this one added soon.

Wonderful photos and fascinating information about them using lures to catch fish -- amazing.