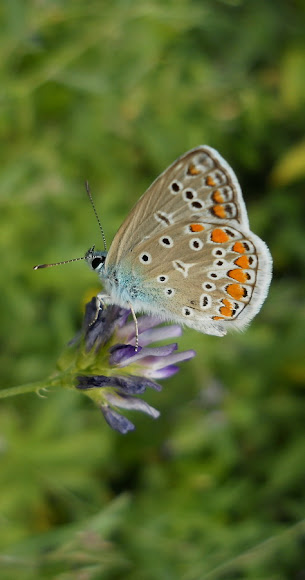 Male uppersides are an iridescent lilac blue with a thin black border. Females are brown with a row of red spots along the edges. They usually have some blue at the base of the wings and, especially in Ireland and Scotland, are mostly blue but always have the red spots. Undersides have a greyish ground colour in the males and more brownish in the females. Both sexes have a row of red spots along the edge of the hindwings (extending onto the forewings though generally fainter, particularly in the males where they are sometimes missing altogether). There are about a dozen black centered white spots on the hind wings, nine on the forwings. The white fringe on the outer edge of the wings is not crossed with black lines as it is in the Chalkhill and Adonis Blues, an important difference when separating these species, particularly the females. (wikipedia)

This species is found in a wide variety of habitats, including unimproved grassland such as roadside verges and waste ground, downland, woodland clearings, heathland and even sand dunes.

I had to follow him for many minutes. It's quite fast. I noticed that after a while he is tired and that's your chance to take a photo.

@Martimar1 : his name comes from his wings which are blue, the upper side.
Thank you all. :)