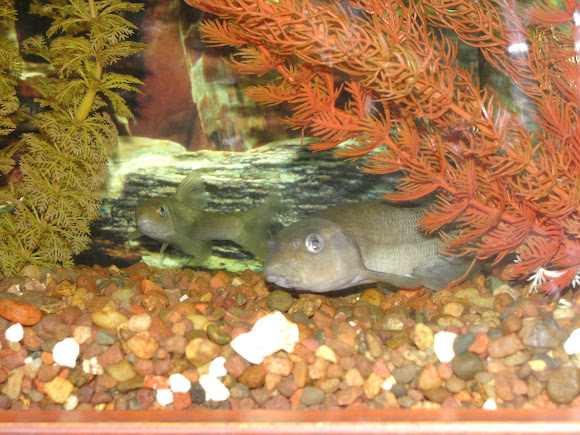 The Cutlips Minnow is named after its unique tri-lobed lower jaw, with the middle lobe sticking out like a small tongue. The upper lip of the inferior mouth is bumpy and extends over the stunted lower “cutlip”. The body of the minnow is elongated and thick, with a rounded, blunt head and snout. The back is generally a dark olive-brown, with bronze-olive sides and a lighter silvery-white underbelly. The rounded, deeply forked tail and dorsal fin are yellowish to red-brown in color. The lower and pectoral fins are pale yellow. There is a generally noticeable lateral line running straight for the most of the length of the body, curving up slightly behind the gills. Cutlips Minnows feed mostly on aquatic insect larvae and small mollusks, but may also eat small crayfish and worms. Cutlips Minnows will also knock out and eat the eye of other fish competing for territory. A nest builder, the cutlips male constructs a nest of stone, some of which are up to 18 inches across. Spawning happens late in spring when the male attempts to crowd females over its nest.

Cutlips Minnows are found much of eastern North America, preferring warm streams and creeks with slow-moving current over gravel bottoms.