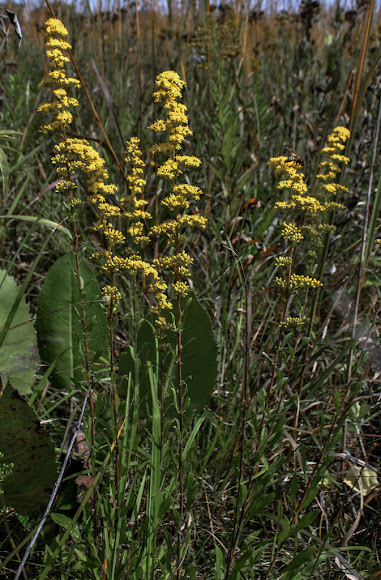 Solidago nemerosa, commonly called old field goldenrod, is a rhizomatous, upright perennial of the sunflower family that typically grows to a very compact 6” to 24” tall (infrequently to 30” tall). It is one of the smallest of the many species of goldenrod. It is native to North America across the southern provinces of Canada from Newfoundland to British Columbia and in the U. S. from Maine to Florida west to Montana and New Mexico. It is found in a variety of locations including old or fallow fields, dry open ground, prairies, leached or eroded slopes, glades, loess hills, dry open woods, thickets, roadsides and along railroads. This is an erect perennial that typically features a clump of 1-6 unbranched gray-green stems densely covered with short white hairs. Stems are clad with alternate, narrow lanceolate to oblanceolate, gray green leaves (to 4” long and 3/4” wide) with fine hairy surfaces. Larger lower leaves have winged petioles and toothed margins. Smaller upper leaves lack winged petioles and toothed margins. Flowering from August to November, the stems are topped with narrow, often downward-arching, one-sided, bright yellow flower plumes (panicles to 4-10” long), with the flowerheads (each to 1/4” across”) primarily located on the upper side of each panicle. Flowerheads are replaced after bloom by hairy achenes. Goldenrods are attractive to bees and butterflies. Goldenrods have been wrongfully accused of causing hay fever which is actually an allergic reaction to wind-borne pollen from other plants such as ragweed. Genus name comes from the Latin words solidus meaning whole and ago meaning to make in reference to the medicinal healing properties of some species plants. Specific epithet means growing in woods in reference to one of the locations where this plant is found growing in the wild. Common name of old field goldenrod is in reference to another one of this plant’s common growing locations.