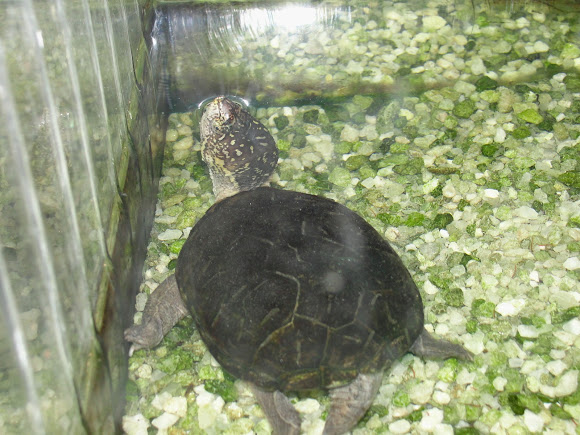 The mud turtle is a small reptile, measuring 3-4 inches. The carapace (upper shell) is olive to dark brown to almost black, patternless, smooth and keelless. It has only 11 marginal scutes (plates) rather than the 12 found on most turtles. The plastron (lower shell) is yellow to brown, double-hinged, with 11 plates. Males have a well-developed, blunt spine at the tip of the tail and rough scaly patches on the inside of the hind legs. Breeding occurs soon after the turtles leave hibernation, which in New York occurs from late April to May. In June, the female digs a 3-5 inch cavity in vegetative debris or in sandy loam soil, where she deposits 2-6 eggs. In the south, three clutches are typically laid each year, but in New York, one clutch is most likely. The eggs incubate for an average of 76 days, but may overwinter in the nest. Muskrat and beaver lodges are occasionally used as nest sites. Females reportedly reach sexual maturity in 5-8 years; males require only 4-7 years. In New York, though, sexual maturity may take 8-11 years. This turtle is said to eat earthworms, snails, crayfish, small crabs, spiders, beetles, larvae of different insects, caterpillars, frog eggs, tadpoles, small frogs, small salamanders, dead fish, algae, and different types of aquatic plants and grains.

They can be found in fresh or brackish water, including marshes, small ponds, wet ditches and fields, and offshore islands. They prefer shallow, soft-bottomed, slow-moving water with abundant vegetation. Individuals can be seen prowling pond bottoms during warmer months. If the habitat dries up, they may move over land to another body of water, or burrow into the mud and aestivate (pass the summer in a state of stupor).

The mud turtle is the rarest species of turtle in New York. Mud turtles are seen crossing roads, most likely in search of nest sites or water. Turtles killed by passing cars are a very significant loss to populations. Draining wetlands for urban and industrial development has impacted populations, reducing the amount of suitable habitat. Upland nesting and hibernation sites have also been impacted by land clearing, development and fragmentation from road construction. Overcollecting for the illegal pet trade exploits adults necessary for sustaining populations.