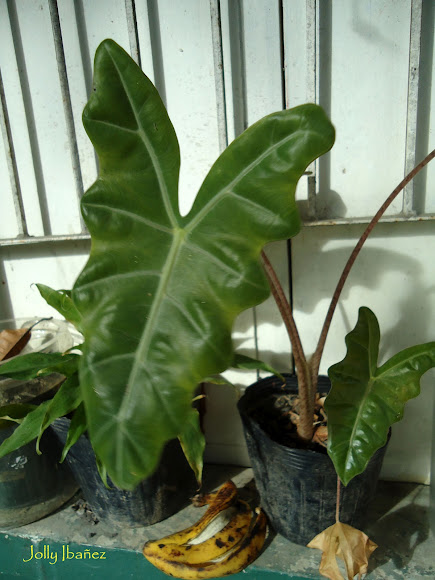 Alocasia sanderiana, commonly known as the kris plant, is an ornamental plant in the Araceae family. It is native to Misamis Occidental and Bukidnon, Philippines. It is classified as Critically Endangered by the International Union for Conservation of Nature (IUCN). Alocasia sanderiana is also known as the kris plant because of the resemblance of its leaf edges to the wavy blade of the kalis dagger (also known as kris or keris). It is a tropical perennial with upright shiny, V-shaped and deeply lobed leaves. The plant can be up to 6 ft (2 m) tall and large in its native habitat. However, cultivated specimens are smaller. It possesses leaves that are evergreen, pelted, V-shaped, deeply lobed, and a glossy deep-green with large silvery white veins. They are about 12-16 in (30-40 cm) long and 6-8 in (15-20 cm) wide, with red-green undersides. The leaf stem is about 2 ft (60 cm) long. The rhizome of Alocasia sanderiana is vertically placed and is known as root stock. It has creamy-white inflorescences that are about 6 in (15 cm) long, and that are made of a green and white spathe that covers the tiny flowers. Female flowers are grouped at the lower part of the inflorescence, whereas the male flowers are at the top. The fruits are orange-red berries and are not edible.

This plant is listed as a critically endangered species by the IUCN.