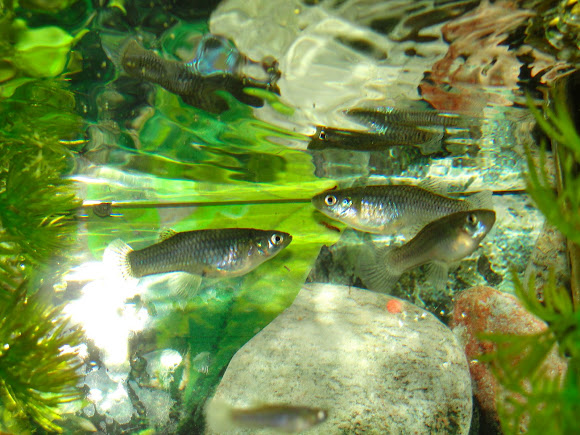 The mosquitofish, Gambusia affinis, is native to southern and eastern portions of the United States. Originally introduced into California as early as 1922, they have been one of the most effective non-insecticidal and non-chemical methods of controlling mosquitoes for over eighty years. Mosquito fish do not lay eggs, but rather give birth to live young. These fish, therefore, require no special environment, as most other fish do, for depositing and hatching their eggs. They breed throughout the summer and new broods are produced at intervals of about six weeks, with 50 to 100 young in a single brood. The young are approximately 1/4 inch in length when born and grow to a maximum size of about three inches. They are ready to begin the work of destroying mosquito larvae at once. Mosquitofish can eat mosquito larvae as fast as the larvae hatch from eggs, as many as 100 per day. The earliest brood of the season, born in April and May, become sexually mature and produce young when six to eight weeks old. Mosquitofish live 2-3 years and can tolerate a wide range of temperatures. Mosquitofish are intended to be used for stocking ornamental ponds, unused or "out-of-order" swimming pools, and animal water troughs. The beneficial Mosquito Fish can consume large quantities of insect larvae in your pond however, this voracious feeder will also consume other insect larvae and algae to benefit your pond in numerous ways.