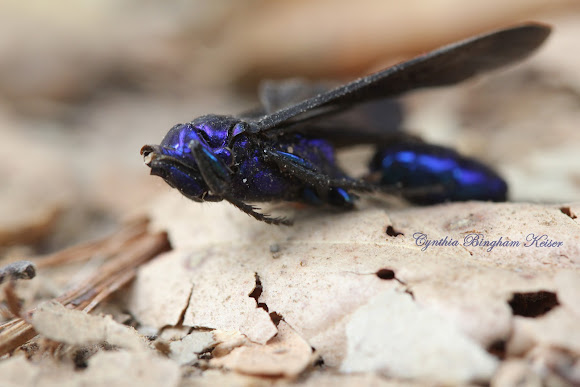 Blue/purple metallic colored wasp was found dead on the trail. The wings are the same color as the body. "A large, active, blue-black wasp with irridescent blue wings. Frequents flowers for nectar and buildings for nest sites." - BugGuide

Trail in riparian oak area. This species is found "from southern Canada to Mexico" - BugGuide

"Although generally not closely associated with humans, they are found wherever their hosts (Gryllus crickets) are found, which could include close proximity to homes (though not so much as Sceliphron and Chalybion). Chlorion is usually found in open areas such as meadows, overgrown fields, dunes, beach edges, etc., although they may not necessarily hunt in the same habitat as they nest." - BugGuide

Thank you all. I was sad that it was dead but the color was amazing to see on the trail!

Thank you also for the ID suggestions. It looks like C. californicum is a great match! We do have Ampulex in the states but not that species.

Wow Cindy this is a beautiful find !