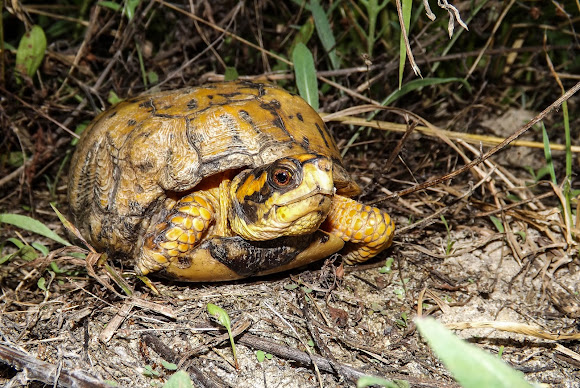 This old, battle-scarred Eastern Box Turtle was one of my favorite finds this year. I found her in a dry grassy field an hour or two before sun set on my way back from a hike. I hadn't seen a box turtle for nearly 10 years before this, and I was always looking. In Delaware there are very few large patches of forest left, leaving only small fragmented pieces of natural habitat for the wildlife. This habitat loss and separation forces these mellow little turtles to cross roads to find mates, which often means death when there is traffic. As a result they have difficulty breeding and their numbers continue to decline.Their future isn't looking all that great for them in some places. This individual was missing her front left leg, and the shell had been chewed quite a bit above the missing leg - probably by Red Foxes, which have a healthy population in the area. She was also very old, judging by the faded shell and healed scars. I was very excited to find it, but also respectful of the journey it was on and where it's been - so it was a strictly hands off, quick photo shoot and the turtle went on it's way.

An abandoned overgrown agricultural field - Mostly dry grasses and shrubs. It borders a large pond and moderate-sized forest with swampy areas to the north, and residential areas to the south, west and east.

While it's great to see an old, relatively healthy turtle doing it's thing in the wild - I have to wonder if there is a breeding population left in that area, or if this was one of the last ones hanging on.