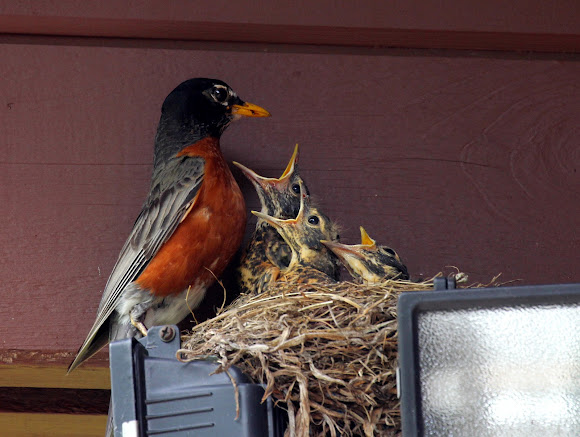 Large songbirds with a round body, long legs, and a long tail. They have gray wings with orange-brown underparts and black heads. This series of pictures shows a parent feeding nestlings and removing fecal sacs. There were three nestlings in this nest, although one fledged later that afternoon.

Spotted nesting on top of some lights high up on the side of a house in a rural area.

Photos 3-6 show one of the nestlings raising its rear and then the parent removing and eating the fecal sac. The nestlings poop after each meal, producing a white fecal sac. The parent collects the fecal sac and either eats it or carries it away and disposes of it. The sac is made of thick, strong mucus so that the parent can pick it up and carry it without puncturing it (in the photos you can clearly see the white urine and brown fecal matter that are part of the fecal sac). Apparently, newborn baby birds don't have a lot of bacteria in their intestines, so their poop is safe for the parents to eat - especially for the first few days. This also means that the fecal sacs contain a lot of partially digested food, which the parents can take advantage of nutritionally by eating it. Eating the droppings further allows the parents to give their babies more worms and insects that they find rather than needing to eat this food themselves. But, once the droppings start having more bacteria, the parents are supposed to stop eating them - or so I thought...these nestlings are obviously more than a few days old, and yet the parents are still eating the fecal sacs. I saw this one parent eat two fecal sacs, one right after the other.