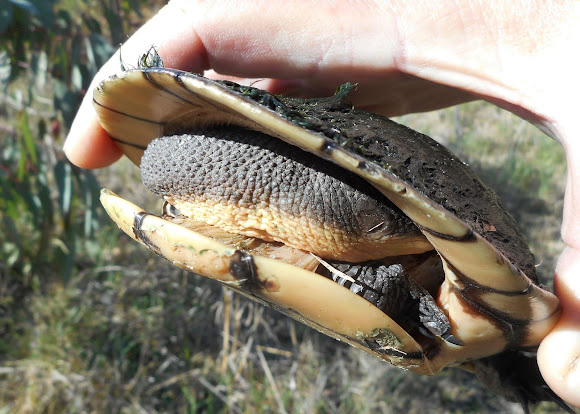 What could have been the very worst day of this turtle's life turned out to be its best. I found this fellow crossing the road at the same time a crow did, and it was being pecked quite savagely. If not a crow, a car or truck could easily have been his demise. A hard shell is no defense when it comes to birds and motor vehicles. Uninjured, I placed him back in a deep roadside channel. As for the turtle itself, it is one of only a small handful of freshwater species found in SEQ, and is a member of the family Chelidae (side-necked turtles), and subfamily Chelodininae. Although there are colour variations within the species, my ID was based not only on the scutes (plates) of the carapace and plastron, but also the number of claws on the forelimbs. Chelodina longicollis has four claws, whereas other species (such as Chelodina expansa) have five. Due to its size, I think this is a fairly young specimen.

Rural area with many freshwater dams. These turtles frequently move between them, and this is certainly the case at present, particularly after recent, heavy rainfall in the region.

The last photo shows a second turtle I found crossing a dirt track, not too far from my other rescue. I always stop and remove wildlife from the road where possible, but some drivers aren't so obliging and will carelessly, or deliberately, kill an animal. PS: I had to laugh at this little fellow. He made sure his feet were tucked away, but he forgot to pull his head in. Obviously he was too interested to see what was going on to worry about his noggin.

Thanks, Sukanya and Doreen. They are lovely turtles. I do freak out when I see them on the road.

Thanks Neil. And on behalf of the turtle. Thanks, again!