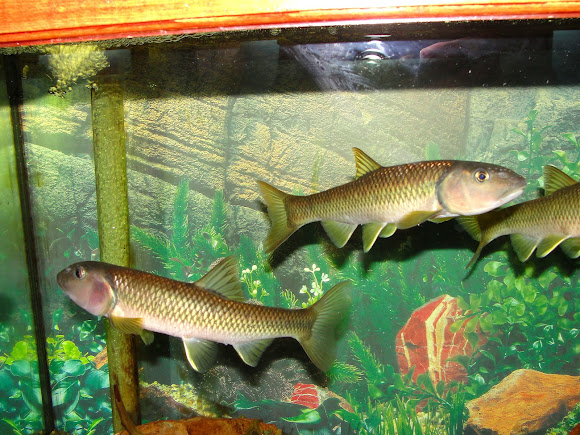 The creek chub is a medium-sized minnow that can reach lengths of 8-10 inches. Throughout most of the year creek chubs appear black or bluish above and silvery below, though during the spring spawning season male creek chubs take on a bright, rosy color and develop at least four large tubercles on each side of their heads. These breeding tubercles are the basis for one of the common names for the creek chub, "horned dace." Creek chubs also have a single, small barbel in the corner of each jaw that is sometimes hidden between the maxillary and premaxillary bones. Adult fish are most easily identified by a prominent dark spot at the base of the dorsal fin. The male creek chub builds and carefully guards a mound of small stones in which the eggs are deposited. The creek chub is described as an opportunist and a carnivore, and consumes many different things to survive, including fish, insect remains and vegetation, amphipods, adult Coleoptera, Ephemeroptera nymphs, Odonata larvae and Diptera adults and larvae. Males increase reproductive success by migrating to a spawning area. The male then initiates building a spawning site to draw in females in the surrounding area. This most likely occurs in small pits with small pebbles to protect the area where eggs are laid. Once females enter, the male wraps around her pectoral fin and body, fertilization occurs, and the female leaves. Around 25-30 eggs are released each fertilization cycle. Often times, these reproductive cycles occur in communal nesting sites where the male controls the territory and protects from intruders.

found in creeks and shoreline areas of lakes within all drainages