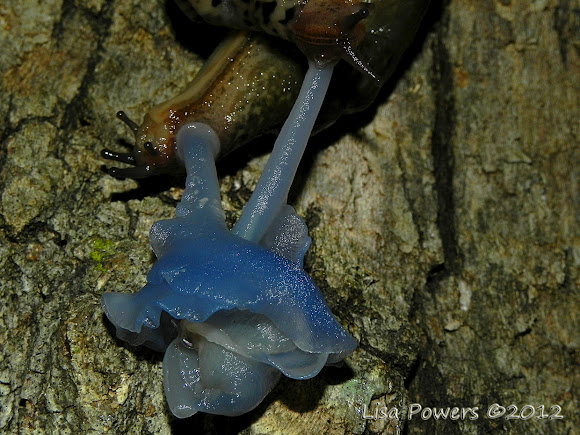 Mating slugs. I had never seen this before. It was beautiful! They were attached to the side of the tree with a long snotty strand and were hanging about 6 inches away from it. They were intertwined and spinning too!

The mating habits of Limax maximus are considered unusual among slugs: the hermaphrodite slugs court, usually for hours, by circling and licking each other. After this, the slugs will climb into a tree or other high area and then, entwined together, lower themselves on a thick string of mucus, evert their white translucent mating organs (penises) from their gonopores (openings on the right side of the head), entwine these organs, and exchange sperm. Both participants will later lay hundreds of eggs. A commonly seen practice among many slugs is apophallation, when one or both of the slugs chews off the other's penis. The penis of these species is curled like a corkscrew and often becomes entangled in their mate's genitalia in the process of exchanging sperm. When all else fails, apophallation allows the slugs to separate themselves. Once its penis has been removed, a slug is still able to participate in mating subsequently, but only using the female parts of its reproductive system.

Congrats Lisa, your spotting has been featured in the Project Noah Valentine's Day blog! http://blog.projectnoah.org/post/4308288...

Great series, thanks for the information, great spotting.
You encourage me to place my slug spotting, although it is not as interesting as yours.

Great spotting, and thanks for adding it to Southern Romance. Thanks for all the fascinating information. Slugs are bizarre!

Dan,
It is not so much that it has to be in a mission, but that this is the most likely place people will search if they have a similar spotting and are looking for a match.

I see what you're saying, there is no mission to cover it,but do all spottings need to be in a mission, even if they techinically don't belong?

Thanks Dan...and no, it is not really an insect at all and should not be classified as such, but there are no Tennessee missions that cover it, so hopefully people will read both our notes and understand that. It is at least in the 'other' category.

Cool! I saw the same scene last summer. I'm not sure if this spotting belongs in Insects of TN mission as slugs are a gastropod mollusc. Would that still be considered an insect?

Fascinating series! Thanks for posting it!

Thanks Karen! I never thought I would get beautiful pictures of slugs!

Beautiful! I never thought I would ever say that about slugs!

These are Leopard Slugs (Limax maximus). Their mating habits are rather unusual.
http://en.wikipedia.org/wiki/Limax_maxim...

Chester,
Thanks! I have added it as suggested :-)

Mayra, Atul, Johan and Chester....thanks, it was a most unexpected event and took a minute for me to process what was occurring.

Thanks Emma and Ava! I have a few more add.

Happy 300 with this beautiful spotting!

Nice spot, you should add it to the southern romance mission.

Nature in all its facets! Thanks for sharing.