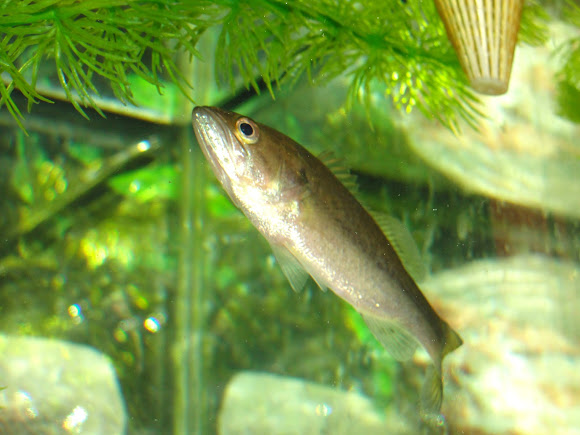 This small, 2 to 3 in dark sunfish is distinguished by nine or 10 dorsal spines and 10 to 13 rays. The anal fin has three spines and nine or 10 rays. Lateral line scales number from 30 to 32; 16 to 18 rows of scales surround the caudal peduncle. The maximum depth is equal to or less than half the total length. Males have rows of blue or silver spots along their dark sides; females have lighter sides with fewer spots. Small individuals have faint vertical bars that fade with age. Vertical fins exhibit scattered dark blue spots on a pale gray background. The black spot on the ear flap is about two-thirds to three-quarters the diameter of the eye. A dark bar extends downward from the eye. Bluespotted sunfish feed on snails, zooplankton, amphipods, and insects.

The bluespotted sunfish lives in slow-moving streams and standing waters where dense aquatic vegetation is present, and this species is also found in darkly-stained waters with extensive areas of silty substrate and decaying vegetation.