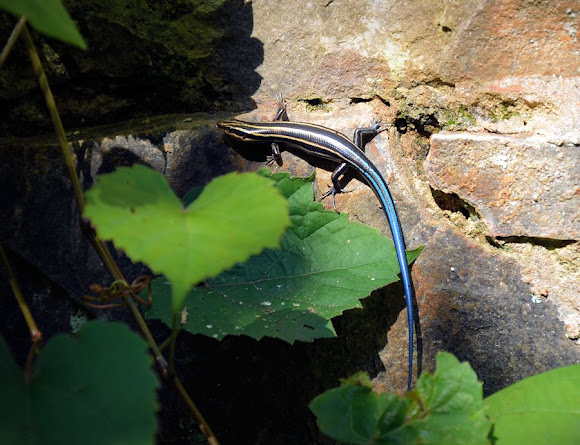 Blue-tailed skinks are usually about 4 to 8 centimeters long. When they become frightened they have the ability to pop their tail off and it will continue to wiggle and distract their predator while they run away. When young they have a dark black body with bright yellow stripes leading from the back of the neck down to the meeting of the bright blue tail. As the juvenile males age, they lose their yellowish stripes and their back starts to become a brownish black color, and they begin to grow a reddish color underneath the neck during the mating seasons. Females usually keep their blue tail for their whole life, though. It is thought that the bright coloring on the tail is intended to direct the predator's attention to it, instead of the vulnerable body.

Blue-tailed Skinks often burrow and build tunnels so they have access to a hole at anytime. They can usually climb very well. They are commonly observed on low vegetation and low on tree trunks.