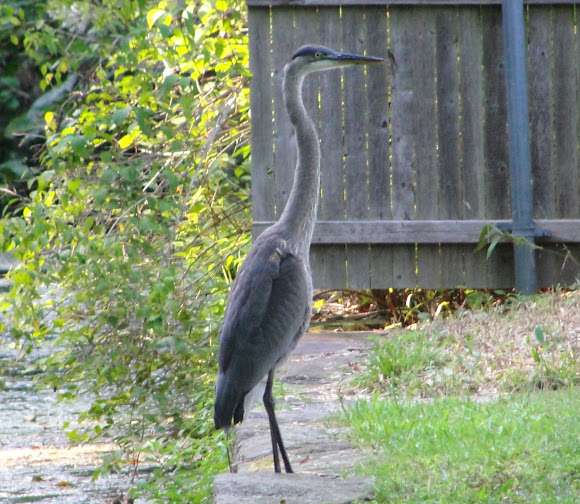 Great blue herons' size (3.2 to 4.5 feet/1 to 1.4 meters) and wide wingspan (5.5 to 6.6 feet/1.7 to 2 meters) make them a joy to see in flight. They can cruise at some 20 to 30 miles (32 to 48 kilometers) an hour. The all-white color morph found in the Caribbean and southern Florida is often called the great white heron, but it is in fact the same species. They are expert fishers. Herons snare their aquatic prey by walking slowly, or standing still for long periods of time and waiting for fish to come within range of their long necks and blade-like bills. The deathblow is delivered with a quick thrust of the sharp bill, and the prey is swallowed whole. Great blue herons have been known to choke to death by attempting to swallow fish too large for their long, S-shaped necks. Though they are best known as fishers, mice constitute a large part of their diet, and they also eat insects and other small creatures. Though great blue herons hunt alone, they typically nest in colonies. They prefer tall trees, but sometimes nest in low shrubs. Females produce two to seven eggs, which both parents protect and incubate. Chicks can survive on their own by about two months of age.

Great blue herons are waders, typically seen along coastlines, in marshes, or near the shores of ponds or streams.