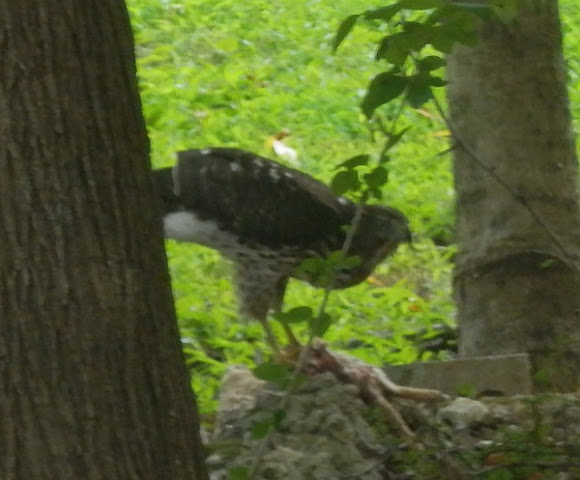 A hawk eating the remains of a rabbit. The area it chose to stop in is a decent distance (40 feet) from all of the surrounding houses and outbuildings. I believe this is a Red-tailed Hawk (Buteo jamaicensis)?

Suburban neighborhood with several mature trees. Suburban neighborhood with several mature trees (mixed). The trees are tall enough to nest in. This hawk was parked in our walnut tree quietly grooming itself. The area is also host to a good deal of bugs and birds (small and medium sized), chipmunks, frogs, snakes, and rabbits, as well as racoons, foxes and deer.

The hawk could clearly see me through the window and did not care for my attention. When I didn't leave after a minute and a half it turned away from me slightly, looked about a bit, and finally took it's lunch and flew off. The first is pic uploaded a photo, but of the photos I took were not in focus so I switched to video. The rest are screen-captures from that video. The third and fourth picture are an attempt to show the tail, but I never did get a very good look at it past the tree.

When I finished posting this (and including the confirmed ID) I went off into my living room and discovered another (?) hawk so I got to turn right back around and add a second posting. I'm linking to it just in case they are, in fat, the same bird. The lighting was ever so much better there.
http://www.projectnoah.org/spottings/132...

Thanks so much for the confirmation, RobBielawski.