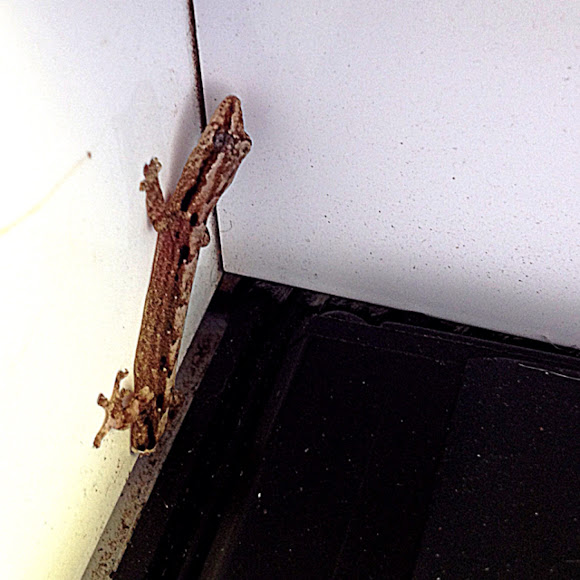 This one was missing its tail and showed dark brown colors. Seen in the corner of a doorframe. The Mourning gecko is creamy to brownish in color (lighter on the belly) with a darker bar through the eye region to the tip of the snout, and inverted, V-shaped dark bars (or paired spots) along its back. Tooth-like scales line the side of the gecko’s moderately flattened tail, and its smooth skin may feel silky if touched. The gecko’s length is about 3¼ inches (8 cm), making it the second smallest of the geckos established in the Hawaiian Islands. Generally the slowest moving of all geckos in the Hawaiian Islands, the Mourning gecko is sometimes seen licking the sap off fruits, such as papayas and mangoes, but also feeds on insects, and may be seen at night near lighted areas where insects gather.

Found Outside and inside in tropical areas. Kauai. Mourning geckos may be seen in trees as well as on the ground, and also inhabit houses where they are sometimes quite friendly in the kitchen area.