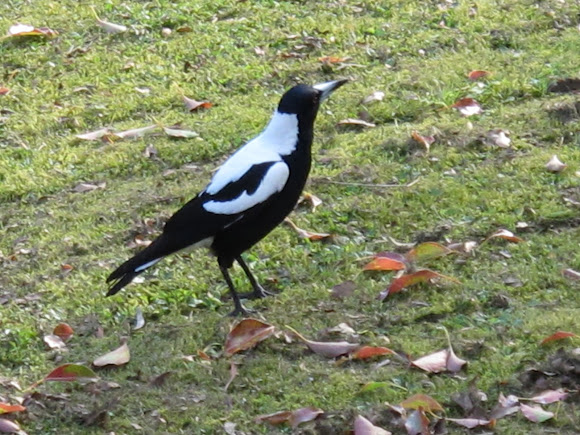 Originally from Australia Magpies were introduced into New Zealand in 1864. They are about 40cm in length with contrasting black and white plumage. They are easily identifiable as the only New Zealand bird with a large white patch on the back of its head.

Mostly live in open grassland, paddocks and around city park areas. They feed mainly on spiders, centipedes, grubs, worms, snails, slaters and they also eat skinks and any similar small animal they encounter.

Nest in early spring making a rough untidy basket of twigs built mainly by the female mainly in macrocarpas, pines, willows and ecucalypts. They usually have 3-5 eaggs that hatch in about 20 days. The fledglings leave the nest about 24 days after hatching

Hi Jill. You can add to your spotting that this is a male. The males are white backed, whereas the females, and juveniles, have a silver scalloping to the white feathers on their backs.