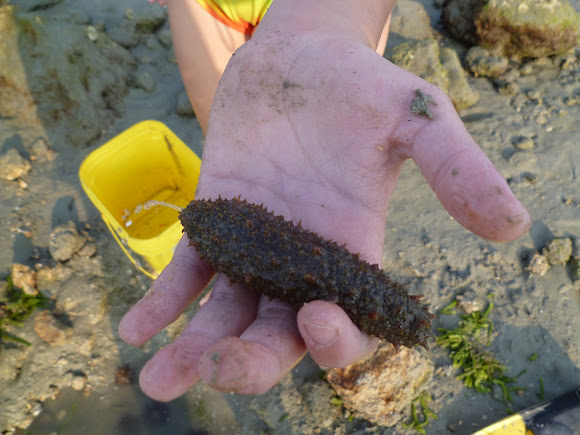 The Florida sea cucumber can be up to 20 cm long. It has a tough, leathery skin with blunt bumpy protrusions. It has five rows of short tube feet on the underside which allow it to move across sand and burrow into it. It can be mottled brown, fawn or white to blend in with the sea floor. The mouth is on one end and is surrounded by a ring of feeding tentacles. The tentacles shift through the sand collecting detritus to feed on. In the first picture you can see the Florida sea cucumber squirting water to the left as it contracts. In the second picture the sea cucumber has taken in water to swell up and enlarge. This is part of a feature called the catch collagen that forms their body wall. They can loosened and tightened it at will. If the sea cucumber wants to squeeze through a small gap, it can essentially liquefy its body and pour into the space. It can also hook up all its collagen fibres to make its body firm again.

Found in sea beds just below the low tide mark and up to depths of 5 meters. It lives on sand and sea-grass beds on the coast of Florida, the Gulf of Mexico and in the Caribbean Sea.

The Florida Sea cumber is edible and often used in Asian cuisine. It can have a small fish called the pearlfish living inside it in what's called a commensalistic symbiotic relationship. The Pearlfish finds protection by living inside the sea cucumber during the day. It comes in through it's anus. At night it leaves to find food.